How To Unlock iPhone with Apple Watch - Apple today released the first developer beta of iOS 14.5 and watchOS 7.4, bringing major changes to the integration between iPhone and Apple Watch. Now you can use Apple Watch to unlock your iPhone while wearing a face mask for the first time. How it works is described below. 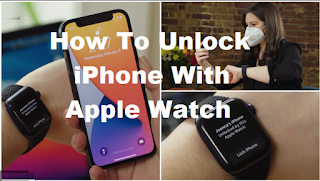 How To Unlock iPhone with Apple Watch

To activate Unlock iphone with Apple Watch, open the Settings app on your iPhone, then look for the “Face ID & Passcode” setting. After you enable this feature, your Apple Watch authenticates your iPhone as long as the following conditions are met:

Another thing to keep in mind here is that if you disable the wrist detection feature of the Apple Watch, you cannot unlock the iPhone with the Apple Watch.

Also Read: How To Hold Conference Call With Your iPhone

The function of this system is transparent enough for the user after activating it. Like I said before, you should try it wearing a mask and you will see how your iPhone is unlocked at the same time as your Apple Watch. the sound of locks ring and vibrates on your wrist. However, there are situations where this unlock system will not work to provide more security:

That is the information that can be shared about How to Unlock iPhone with Apple Watch, I hope this information is useful for you